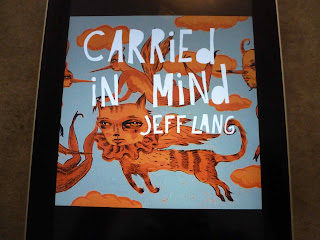 Saying something like here’s another Jeff Lang album that’s everything the long time listener would expect might sound rather like damning the album with faint praise, but right from the beginning of Running By The Rock all the regular elements are there in abundance. Impassioned vocal, furious supercharged slide guitar that’s sitting on the theoretically improbable but in Lang’s case close to inevitable margin between virtuoso and gutbucket, and it stays in that sort of territory right the way through to Way Past Midnight.

Some of the elements change from recording to recording. Here, he’s integrated Garrett Costigan on pedal steel alongside his regular rhythm section of Danny McKenna (drums) and Grant Cummerford (bass). You’ll also, invariably, get some light and shade, and after the fury of Running By The Rock the pedal steel comes to the fore in the is reflective and restrained I'm Barely There.

Fisherman's Farewell, co-written with his wife Alison Ferrier, who also contributes harmonies, works as a minimalist showcase for Lang’s guitar chops, with moodily atmospheric burbling underpinning the vocal and the tone gets a tad heavier for Towards Love with Lang delivering Neil Young-style fuzz while Costigan’s pedal steel hovers above.

Costigan’s moody contributions are there again in Mama, Why You Holding Back Now? which taps into darker emotions surrounding domestic violence and emotional blackmail before a minute and a bit of eerie san xian (Chinese lute) in an instrumental You Never Know Who's Listening and the traditional Jack-A-Roe, which Lang first heard on Dylan's World Gone Wrong, a track that sits comfortably beside Lang’s sparse but very traditional sounding tale of rape and murder on Newbridge, a prime piece of what Lang would describe as Disturbed Folk.

Or rather, it would if there wasn’t an intriguing cross between Little Richard and AC/DC on Frightened Fool, a little rocker with an earworm chorus that mightn’t quite be up there with awopbopaloobopalopbamboom but isn’t that far off it in between the two. The track would be good fun if it wasn’t for the violence that underlies the lyrics. As it is, it serves to give a little bit of light relief in between Jack-A-Roe and the very chilling Newbridge.

The album closes with a fatherly lullaby in Way Past Midnight and the whole, cut live (eyeball to eyeball in the man’s own words) in Lang’s own studio onto 8-track analogue tape is very much another Jeff Lang album that’s everything the long time listener would expect. Lang has been working this vein of traditional-sounding song reworked and reinvented for so long, pushing his own envelope so consistently as he seeks to add further variations to his extensive bag of tricks that his latest collection of disturbed folk is guaranteed to provide an intriguing listen that will reward frequent replays.