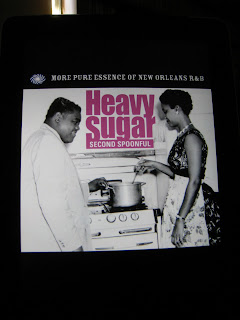 The casual visitor to The Little House of Concrete, where these four sets are on high rotation might counter Hughesy's enthusiasm for the joys of New Orleans R&B with well, Hughesy, that's all very well but deep down it's just old style rock'n'roll isn't it?

And the casual visitor would, in part be right. An awful lot of what we've come to know as old style rock'n'roll originated in recording studios located in and around New Orleans. If the casual visitor still isn't convinced I'd offer two names - Fats Domino and Little Richard.

Those two names say a fair bit about what happened as that first wave of R&B boomed out over the late night airwaves on stations like Nashville's WLAC where the  daytime playlist was aimed at white audiences, but after dark the station beamed rhythm and into thirty states from the Gulf of Mexico and across the Caribbean to Jamaica, as far north as Buffalo, New York,  and  west to the foot of the Rockies, reaching the ears of, among others, Bob Dylan, The Band’s Robbie Robertson, Rick Danko, Richard Manuel and Levon Helm. Mother Earth singer Tracy Nelson, growing up in Madison WI was another listener.

It wasn't long before Fats Domino was being firmly set in the mainstream, close enough to white bread to avoid being pushed to the sidelines (though one notes the frequency of white bread covers of Fats' material) and ending up as a fixture in Las Vegas. Those interested in pursuing the subject are respectfully pointed towards Rick Coleman's excellent Blue Monday: Fats Domino and the Lost Dawn of Rock 'n' Roll.

Little Richard may have grown up in Georgia and started recording for the Houston-based Peacock label (ironic, that, you'd be pushed to find a better descriptor than peacock when it came to Richard's stage presence) before moving on to Specialty (based in Los Angeles) but his biggest hits were cut at  Cosimo Matassa's J & M Studio in New Orleans with studio players who had worked with Fats Domino (drummer Earl Palmer and Lee Allen on sax for starters) rather than using his own road band. For both, recording for labels with a wider distribution brought success that wasn't possible for some of their Crescent City peers.

There are half a dozen offerings from each scattered through the hundred and fifty tracks here, and the enthusiast who wants to explore either man's extensive catalogue would be best advised to head elsewhere. There's an almost bewildering array of Fats Domino compilations out there, and Hughesy's copy of The Fat Man box set, acquired fifteen or so years ago is comprehensive enough to save me the effort of investigating those options further, and if I need more Little Richard there's always the ninety track The Complete Rock'n Roll Years '51-57 for $9.99 at iTunes.

But Little Richard and Fats Domino isn't what this series of compilations is all about.

There's a wealth of material out there, some of it bordering on the well known (Roy Brown's Good Rocking Tonight, Smiley Lewis' Little Liza Jane, Professor Longhair's Go to the Mardi Gras, Art Neville's Cha Dooky Doo and Zing Zing, Don't You Know Yockomo by Huey 'Piano' Lewis with His Clowns), but the real delights are the obscure gems that, for one reason or another, failed to hit the big time. Huey 'Piano' Smith's Beatnik Blues, for example.

New Orleans classics that are better known in other incarnations turn up in disguise. Junco Partner gets morphed into Roland Stone's Preacher's Daughter, with the junkie references neatly scrubbed out and replaced by knowing nudge nudge notions of undying love while Charles Brown delivers a lively run through It's A Sin To Tell A Lie.

Those of us who remember Judy In Disguise (With Glasses) will come across John Fred with and without The Playboys/Playboy Band and there's plenty more to explore if you've got the inclination to do so.

That inclination may well depend on how much of this material the enthusiast has already, but at $9.99 for the three volumes of Heavy Sugar: The Pure Essence of New Orleans R&B (25 tracks on each) and $14.99 for the seventy-five tracks on Heavy Sugar Second Spoonful, you're hardly up for an arm and a leg, and there's almost certainly a swag of stuff you won't have.

Those with an interest in New Orleans music could do far worse than this as a starting point, fleshed out with the four disk Doctors, Professors, Kings & Queens: The Big Ol' Box of New Orleans (buy the hard copy, the booklet is wonderful), Rounder's four disk City of Dreams compilation and the Kindle version of Rick Koster's excellent Louisiana Music. 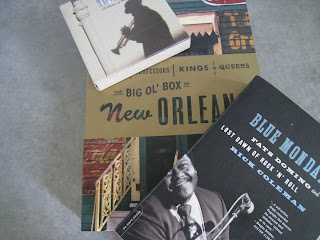 You'll need deep pockets and/or a substantial balance available on the credit card if you were going to do that, but these four titles aren't a bad place to start.
Posted by Hughesy at 3:59 PM