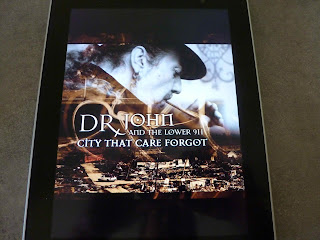 There are some artists you naturally associate with a particular city, venue or other environment, but I can’t think of any that spring to mind as naturally as Dr John and New Orleans. As a teenage session muso in the late 50s, Mac Rebennack was an integral part of a scene he had to get out of due to issues with the law in the mid-60s and when he needed an avenue to provide a gig for assorted transplanted Crescent City music identities based in Los Angeles in the late sixties, the city and its traditions provided the basis for the Dr John persona that has provided him with an ongoing forty-plus year career.

Over that time he hasn’t always lived there, but he’s maintained a constant liaison with the city and its music, even when venturing off onto tangents involving Duke Ellington or Johnny Mercer. Given those ongoing links you wouldn’t be surprised by the tone of 2008’s City That Care Forgot.

Looking back over an extensive discography that’s dominated by Louisiana fonk, even the most ardent fan would have to agree that he’s been hit and miss and the average fan’s mileage is likely to vary with the amount of perceived effort that’s gone into the session. There’s almost invariably something of interest somewhere on a Dr John album, but the strongest material tends to come when he’s got a particular bee in his bonnet (Gumbo, Goin’ Back to New Orleans) or a particularly strong collaborator (In the Right Place). The City That Care Forgot delivers both.

Given the events that followed in the wake of Hurricane Katrina, of course, it’d be difficult not to have a bee in your bonnet, but from the start of Keep On Goin' to the end of Save Our Wetlands there’s a strong slow-burning anger that delivers what is arguably his strongest collection of original material.

As anyone who’s been through a natural disaster would know, as you set about trying to get over the destruction, there’s only one thing you can do, and that’s to Keep On Goin' and the album kicks off with a low key funky starter in a situation where you could well be tempted to come out swinging right from the start.

He doesn’t, however, take too long to focus on his targets. It’s not the destruction itself that’s got him riled, it’s the lack of environmental concern and responsibility and a need for corporations and government be held to account, and Time For A Change makes no bones about it over a rolling R&B groove with crisp horns and guitar work from Eric Clapton to underline the message.

And when you’re looking for those responsible, head straight to the top of the tree. The road to the White House is paved with lies is the first line in Promises, Promises as the Doctor and Willie Nelson take alternate verses attacking the administration and the cronies who lined their pockets in the wake of disaster.

Life is a near-death experience is the opening line of You Might Be Surprised, just under four minutes of ballad in an R&B vein that espouses the power of positive thinking. All you gotta do is want it bad enough and you just might be able to take action and the repetitive cycle of disaster and corruption that characterises the history of the Crescent City.

The five minutes of Dream Warrior rails against the injustices that followed in the wake of Katrina and the hypocrisy that meant the city was still more or less in ruins three years after the storm. It’s the same passion that burns through the first two series of Treme, and the reason for the continued neglect comes through in Black Gold, a denunciation of the Iraq War and America's dependence on oil and the coverup that followed the Gulf oil spill.

What was there before and who was responsible for its disappearance delivers the theme for the next three tracks. Stripped Away tackles the cleansing role of the floods that washed away the rot and decay of the old city and that will, hopefully, be reborn eventually, but Say Whut? balances the picture. It’s a four and a half minute demand that somebody be held to account for the crime, tragedy and devastation that should have been avoided, and speaking of things that need fixing My People Need A Second Line looks at the traditional New Orleans funeral procession that’s being regulated and harassed out of existence as the new wave of carpetbaggers look to profit from the city's culture while doing away with the influences that shaped it.

That, of course, is all part of the Land Grab, with Terence Blanchard’s trumpet featuring again as the Doctor’s vocals nail the issues involved with disappearing neighbourhoods, and opportunistic developers looking for a quick buck through gentrification. An Ani DiFranco backing vocal underpins City That Care Forgot while the lead vocal's gruff denunciation enumerates his disillusion with the fact that an area where music and laughter once filled the air has been drastically changed by politicians and profiteers. The album concludes with environmental pleas to Save Our Wetlands and protect Mother Earth, themes that don’t just apply to New Orleans.

He mightn’t have been there when Katrina struck, but given the fact that the disaster has provided plenty to become agitated about it’s hardly surprising to find the Doctor inclined to rant about mistreatment and failure to deliver.

Overtly political? Possibly, but given the magnitude of the issues and the dissatisfaction produced anything less than fervent vitriol and pointed comment really isn’t going to cut it.