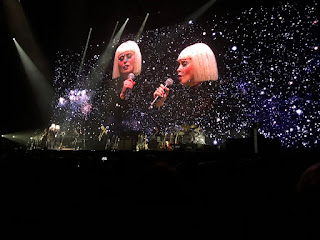 A purist would beg to disagree, but I have, effectively, now seen what I never expected to see: a Pink Floyd concert.

Mr or Ms Purist would, of course, base their objections on the principle that it couldn't be Pink Floyd without the presence of Messrs Gilmour, Wright and Mason on the stage.
That point is what prompts the use of the word effectively.

Rick Wright's not with us anymore, and anyone familiar with the history of the long-term split between Roger Waters and everyone else would know not to expect a reunion that amounted to anything more than a one-off anytime soon.

Since the split, there have been entities touring out there under the Pink Floyd moniker, and they've attracted the predictable criticism that it ain't Pink Floyd without Waters and, probably, Shine On You Crazy Diamond as a nod back to the band's founder.
Given my 'druthers, I'd have seen the "real "Pink Floyd, the classic quartet sometime back before The Wall, with those long, moody instrumental pieces, immaculate musicianship and the odd special effect here and there.

If I had, I mightn't have been inclined to see last night's show, dismissing it with a he'll probably load the setlist with his solo stuff.

It's easy to be critical that way, but you could put that down to a reluctance to shell out a couple of hundred for the ticket, add on airfares and accommodation and time away from home in the cyclone season.

The Understanding Reader will see where I was coming from.

But the long and short of it is that if I had stuck with the I'm not going to pay $270 to see Roger Waters I'd have missed a damn fine show and one of the most spectacular displays of special effects the average punter will ever see.

At that point, one returns to what your average punter would have expected at a Pink Floyd show, regardless of who was present on stage. 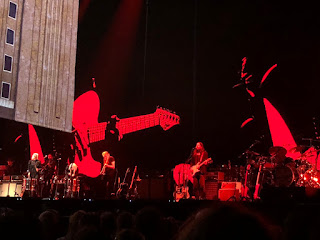 So let's tick off the boxes:

Most of Dark Side of the Moon, for a start.
Tick.

Another Brick in the Wall, a song that I've always had issues with, but whose sentiments I sympathise with. If only one could replace teacher with education department bureaucrats and opportunistic politicians and still make the line scan.
But, tick.

One of These Days.
Tick, and a mightily thunderous rendering it was.

Some special effects, including a flying pig.
Tick, and note that as the pig made its way around the arena airspace, it was only a small part of a stunning visual experience. 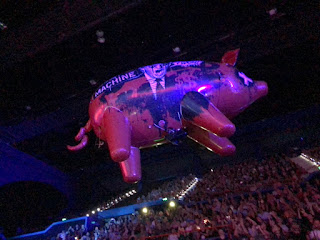 And, finally,, given the need to synch the special effects to the musical content (well, maybe not the pig itself) a show that operates on almost precision timing. The guitar solo can only be this long because the aircraft explodes at the end, and the SFX engineer needs to press the button at 7:58 on the timer.
Tick, noting that there was minimal interaction between those on stage.

Seasoned observers would expect some eye contact, a nod here and there as players moved in and out of solos, a gesture from the leader towards the next featured player.

There was none of that, and given the other considerations, you wouldn't expect it.

You would, on the other hand, have expected some pointed remarks about current affairs, and they were there in spades, throughout the show.

With a big show count approaching forty, and a disinclination to make comparisons and rankings, it's hard to rate last night's show, except to note that I've never seen anything like it. 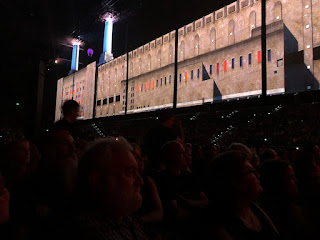 One avoids using terms like "best ever" when you're lining something up against Leonard Cohen, or the legendary Springsteen Brisbane 2014 show that has been rated by those who are inclined to do things like that as possibly the best Springsteen show ever.

But it had all the polish and precision of the Cohen.

It also had the pointed commentary that lies under much of the recent Springsteen, but where that bubbles under, here it washed across the audience in, at times, a sonic wall of righteous anger and almost venomous outrage.

Hardly the quiet pastoralism of, say Grantchester Meadows or Fat Old Sun, but we weren't expecting that, were we?

And, despite the reservations that have seeped in through the preceding seven hundred odd words, one of the very best shows I'm ever likely to see.
Period.

Setlist:
Intro: Speak to Me

Set 2: Dogs; Pigs (Three Different Ones); Money; Us and Them; Smell the Roses; Brain Damage; Eclipse.

Posted by Hughesy at 5:29 PM No comments: