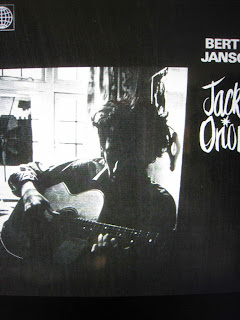 Bert Jansch and It Don't Bother Me were, looking back from the perspective of a bloke who hadn't paid much attention at the time and is now engaged in a catch up mission, interesting enough exercises in fingerpicked guitar and vocals, but having heard that sort of thing from time to time over forty-something years there wasn't anything that made me stop, sit up and pay attention. This one, however, is different.

In any emerging scene you're going to get a degree of reconnaissance and quiet checking out before you hit the real groundbreaking territory, and Jack Orion was a large enough quantum leap from Bert Jansch and It Don't Bother Me to have me surfing over to iTunes to check what might be the missing piece in the jigsaw, Bert and John, Jansch's 1966 collaboration with John Renbourn.

To fill in a bit of backstory (simplified in the interests of not throwing everything out of whack by halting proceedings in order to reread Dazzling Stranger and Electric Eden) Jansch arrived in London in the mid-sixties as a close to complete virtuoso after a musical apprenticeship in  the folk clubs of Edinburgh and a couple of years busking and hitchhiking around Britain and across the continent, travelling as far afield as Tangier before being repatriated with dysentery.

Back in London he'd fallen in with, among others, John Renbourn, Davey Graham, Roy Harper, Wizz Jones and Paul Simon, who was in between the original recording of Sounds of Silence and the percussion added version that became the hit single.

In such circumstances there's bound to be a degree of jamming and cross-fertilisation, and Jansch seems to have hit it off with Renbourn to the extent that he appeared on It Don't Bother Me (as did Harper) and the results were first heard on Bert and John, which was quickly followed by Jack Orion, the album that (in the words of Colin Harper in Dazzling Stranger (p. 3) all but defined a new brand of music - British fingerstyle or folk-baroque or whatever it may be called.

From the opening notes of The Waggoner's Lad with Jansch on banjo while Renbourn picks out the guitar part we’re looking at traditional material and traditional-sounding facsimiles being given a reinterpretation by two gifted musicians who were, by this stage, sharing a flat with the opportunities for collaboration and exploration such an arrangement delivers.

If you know Ewan MacColl’s The First Time Ever I Saw Your Face from the Roberta Flack version you mightn’t pick it up here, but at 1:45 it’s a prelude to the album’s centrepiece, Jack Orion, a ten-minute adaptation of a traditional ballad where king's son who’s a harper plays before another king, arranges to meet his daughter, and is betrayed by his servant who is supposed to wake his master but goes in his place and rapes the princess, who subsequently kills herself. The harper then kills the servant and then either goes mad or kills himself. There was, apparently, a lot of that sort of thing going around at the time.

In the ballad, Glasgerion was a harper, but while the words had survived in print the tune had disappeared until British folk revivalist A.L. (‘Bert’) Lloyd fitted a tune to the words and changed the lead character into a fiddler. Lloyd had recorded the new version in 1965, and the Jansch/Renbourn interpretation went on to become one of the centrepieces of Pentangle’s concert setlist before appearing on 1970’s Cruel Sister.

From there we stay in traditional territory for the duration, with The Gardener, Nottamun Town (the traditional tune Dylan appropriated for Masters of War that subsequently turned up on Fairport Convention’s What We Did On Our Holidays) and Henry Martin.

The album’s other highlight is Black Water Side, thought to have originated in Northern Ireland, also covered by, among others Anne Briggs, Sandy Denny and any number of Irish performers from the Clancy Brothers down.

This story of a woman who has her heart broken when a suitor breaks his promise of marriage, although she hopes he will change his mind one day came into Jansch’s repertoire by way of folklorists Peter Kennedy and Sean O'Boyle, A.L. Lloyd, and Anne Briggs.  Briggs and Jansch often performed together in folk clubs and around the beginning of 1965 were spending most of the daytime at a friend's flat, working on new material and adapting traditional material to fit Jansch’s guitar work.

Jansch had been playing Black Water Side live well before the Jack Orion sessions and Al Stewart, who’d been following Jansch's gigs closely, had figured out what he thought was Jansch's take on the track, though he used the wrong tuning. Stewart was in the middle of recording his first album, with Jimmy Page playing the sessions and during a tea break Stewart taught Page his version, which subsequently appeared on Led Zeppelin as Black Mountain Side.

After that, the traditional Pretty Polly rounds out an album that might have been light on for original material (though Jansch’s original material drew heavily on traditional sources anyway) but set the groundwork in place for Pentangle’s exploration of the same themes and set things up (at least that’s the way it looks with the benefit of hindsight) for the traditional goes electric approach taken by Fairport Convention, Ashley Hutchings’ various projects along the same lines and much of what followed through to the present.

Hugely influential and required listening for anyone interested in the field.