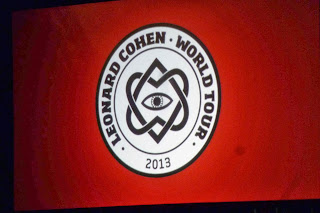 Leonard Cohen received a hearty roar of appreciation very early on the three hour proceedings when he announced tonight we're going to give it our very best shot (or words to that effect).

I suspect provincial audiences are inclined to suspect a name performer might be tempted to phone it in when playing a relative small and relatively isolated venue.

Interestingly, I seem to recall that best shot remark from the show we saw in Brisbane just over three years ago.

The setlist wasn't all that different either. A couple of songs from the new album, some notable exclusions from the extensive back catalogue, but most of the classics were there, delivered in almost exactly the same sequence as a couple of shows I looked at on this setlist site ).He didn't do Hey, That's No Way To Say Goodbye or The Gypsy Wife, but he does from time to time.

Knowing I'd be tapping this out the following morning, I'd done that little bit of pre-concert research. Trying to keep notes in the darkness of a concert venue can be a pain, so I thought I'd do a bit of forensic work on the most recent shows I could find.

The result was a list of thirty-three tracks in what looked to be about the regular sequence, and the only two that failed to make the cut last night were the aforementioned Hey, That's No Way To Say Goodbye and The Gypsy Wife.

But Cohen shows are like that. You pays your money, and you gets an immaculately rehearsed three hours with plenty of instrumental solo work from the members of a handpicked ensemble assembled around one of contemporary music's most esteemed wordsmiths. You might question one of, but leaving it out would drop other favourites like Messrs Costello, Newman, Thompson and Zevon a little too far back in the pecking order.

Regardless of how thoroughly you've rehearsed, there's always the possibility of a wild card, and it came in the form of a possibly indigenous female interjector. Leonard was doing his eighties basic synthesizer shtick on Tower of Song, and making wry remarks that fitted immaculately alongside the line about having no choice and being born with the gift of a golden voice when the interjections came.

The keyboard doodling and noodling continued, but Leonard was late back into the next verse. He seemed to be giggling.

It didn't, however, seem to throw the Webb sisters, who were on stage in the trimmed down Tower of Song ensemble straight after the resumption. They were magnificent throughout, and shone on If It Be Your Will. In combination with the wonderful Sharon Robinson, who had her own showcase on Alexandra Leaving they provided ethereal harmonies that provide a striking counterpoint to Cohen’s battered baritone.

On their own they mightn’t necessarily melt a heart of granite, but they’d go mighty close.

But the vocal trio is only one part of a lineup that’s as impressive in their own way as their boss, who displays his respect for the virtuosos gathered around him throughout proceedings. 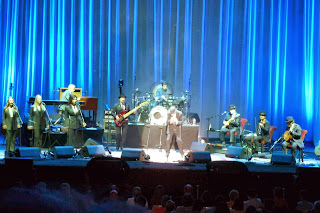 Bassist (electric and upright) Roscoe Beck’s association with Cohen goes back to 1979, and you’d have to think he had a fair bit to do with assembling the rest of the band. According to Cohen’s official website he filled that role back in 1988, so you’d guess he’d have been called to do the same when financial double-dealing forced Leonard back onto the road.

Keyboard ace Neil Larsen arrives with an extensive list of session credits, including George Harrison, Rickie Lee Jones, the Rolling Stones, Jimmy Cliff and Richard and Linda Thompson (big tick in that department) and string and horn arrangements for, among others, Gregg Allman and B.B. King.

Cohen introduced him as Professor, and guitarist Mitch Watkins has spent some time teaching at the University of Texas at Austin, but like Roscoe Beck his association with Leonard runs back to 1979. In between he spent a lot of time working with Lyle Lovett as well as Jerry Jeff Walker, Joe Ely and Jennifer Warnes.

Watkins chipped in with some ringing Wes Montgomery styled guitar licks and Larsen got plenty of opportunities to work out on the Hammond B3 and other keys.

But the real stars on the instrumental front were Javier Mas, whose flamenco and gypsy-infused contributions on bandurria, laúd, archilaúd, and, occasionally acoustic guitar were once again stunning, and Moldovan violinist Alexandru Bublitchi, who regularly went close to stealing the show from the man who, last time I saw the ensemble, regularly threatened to steal the show from the front man.

All in all, a show that was at least as good as Brisbane three years ago, and possibly better. Leonard seemed relaxed. Our seats were much better (which, in terms of performance isn’t that important, but definitely enhances the enjoyment).

The only negative factor, in there was one, came in the absence of Dino Soldo, the keyboard, saxophone and assorted woodwind player who added tones of light and shade last time. Of course, if he had been there we wouldn’t have had the violinist, would we?

But when you’re looking for an assessment, it’s best to turn to some of my fellow attendees, two of whom find Hughesy’s predilection for multiple Bruce Springsteen and Elvis Costello concerts inexplicable. Both of them reported they’d have been happy to front up again the following night if that had been possible.

Me? Given the fact that you’d almost certainly get the same set, I don’t think so.

But if he’s back, by which time he’ll probably be into his eighties, I’m going again. After all, it might be the last time.

Set 1:
Dance Me To The End Of Love
The Future
Bird On The Wire
Everybody Knows
Who By Fire
Hey, That's No Way To Say Goodbye
The Gypsy Wife
The Darkness
Amen
Come Healing
Lover, Lover, Lover
Anthem

Second Encore:
Famous Blue Raincoat
If It Be Your Will
Closing Time

Third Encore:
I Tried To Leave You
I've Got A Little Secret
Save The Last Dance For Me